Play/drink responsibly. If that means using water, use water.

Here we set out to review the hottest game on the college tailgate scene, QB54. QB54 is all types of exciting, providing hours upon hours of hilarious fun, and, if we can admit it, a bit of feisty and testy competition that sometimes leads to loud verbal disagreements.

The objective of the game is to get to 54 points before the other team by tossing touchdowns like Peyton Manning into a basket 40-50 feet away. You can ratchet up the difficulty by pushing the chairs further and further away from each other.

If we can, we drink a few Puppers beers before we get started. It helps us believe that we're playing in our own Super Bowl. 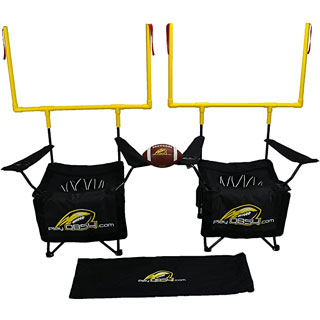 The hottest tailgate game since cornhole. QB54 is the big Saturday Gameday winner, even if your college team is the worst in the league.

There are customized NFL and NCAA footballs that can be purchased, along with referee flags, custom QB54 sets, scoring kits and even t-shirts.

QB54 is a game that should be played with even numbers. In some respects, there is no reason you could roll a 7 on 7. In fact, it could get real fun real quick when it comes to blocking for an interception return.

Pro rules are the next echelon of game play. Every game has house rules that overtime became standard. These are QB54's necessary editions that create even more havoc and drama.

It is important to note that when adopting the Pro Rules, teammates play on the same side. It's also important to know that laterals and blocking are available options during the Pick 6 and Muffed Extra Point.

The Pick 6 in the NFL is a major game changer. What's worse, it always feels like it happens to your team. Well things are no different with QB54, as the Pick 6 can quickly alter the score.

This involves catching a missed extra point with only one hand. From there you have two options.

If you go for option 2 (touchdown) and fail, the other team gets the ball.

The Hail Mary is a spectacular addition to QB54. Whatever you're down at the end of the game is the amount of steps behind your own goal post you need to walk off. From there you have one toss to not only get yourself back in the game, but to potentially win the game altogether, if successful.

This is exactly the type of last minute heroics we prefer in our casual BBQ gaming. Cornhole could learn a thing or two here.

First team to 54 points wins the game. The team that is about to lose can complete a Doug Flutie-style Hail Mary to win the game at this point, following the rules set forth for the Hail Mary. There is another way to win the game and that is to pull off The Fitz.

The Fitz is serious power move in the game that really seems like a flaw in the game mechanics. Then again, that's (possibly) what makes it an exciting move.

If, after a touchdown, you kick the extra point a bit short and it goes in the basket, then it's game over and you win. Yup, that's the Fitz.

QB54 is the perfect game to play while you're day drinking a few Boggs's at a tailgate party or a super soft birthday party. But be careful, have a few too many and after a little, every Pick-6 will escalate from two-hand touch to tackle.