Updated Oct 01 2022
Houston Astros Manager Dusty Baker wears batting gloves to prevent the spread of COVID-19. He has worn batting gloves, usually black gloves or orange, and sometimes blue nitrile or plastic gloves, for a few years now in the dugout while managing Astors games. You're noticing it more often because the team is in the playoffs (World Series) and Astros games are being televised every other day. It's a trending topic for sure.

The Major League Baseball coach's recent habit has been the source of much speculation and debate. Photographs of Dusty Baker with his hands covered in gloves are circulating the internet. These photographs sparked curiosity about whether this is merely a bizarre habit or if there is more to it. Read on to learn more about the World Series glove-wearing situation.

Speaking of the World Series, which MLB team has won the most championships? Hint - It's an American League team. Ok, it's the New York Yankees.

Ultimately, we think we're just glad that Dusty is facing the Philadelphia Phillies and not the Los Angeles Angels in the Series. Why? Because of Shohei Otani. Here's what Baker said about Otani mid season:

"I’m just glad he’s on my side for at least 1 day vs on the other side cuz, man, he can pitch. He pitched a great game last night and he’s getting better and that’s what’s frightening. The fact that we’re in the same division as him."

Dusty needs to go back to having his team tee off against Verlander and Mccullers. Anyway, back to the black gloves ... 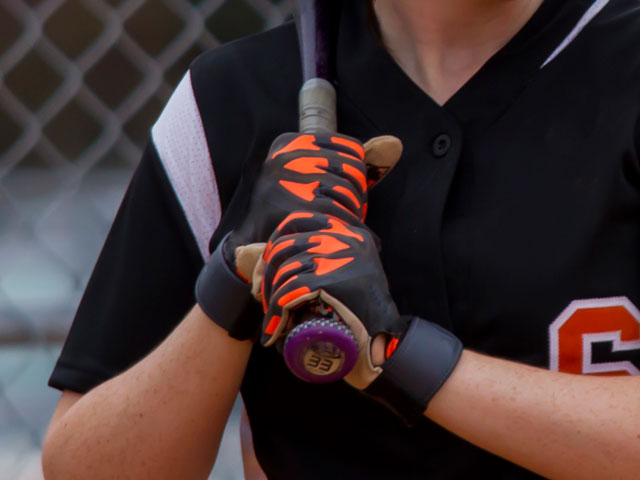 How to Clean Dirt & Grime from Batting Gloves

Batting Gloves serve both form and function, helping a baseball or softball player look stylish, while protecting their hands from the various blisters, scrapes and cuts that come from taking extensive batting practice and playing in games.

Who Is Dusty Baker?

So, one could say that he’s spent a lot of time in the dugout. While not quite an All-Star slugger, Dusty racked up some solid stats, including 242 home runs. He was definitely not a Punch and Judy hitter.

When he was the Giants' manager in 2002, he guided the team back to the postseason and World Series. He has since repeated the feat with the Houston Astros in 2021, and now is back to the World Series in 2022, as his team squares off against the Philadelphia Phillies.

Dusty and the Astros just swept the Yankees, 4-0 in the ALCS. 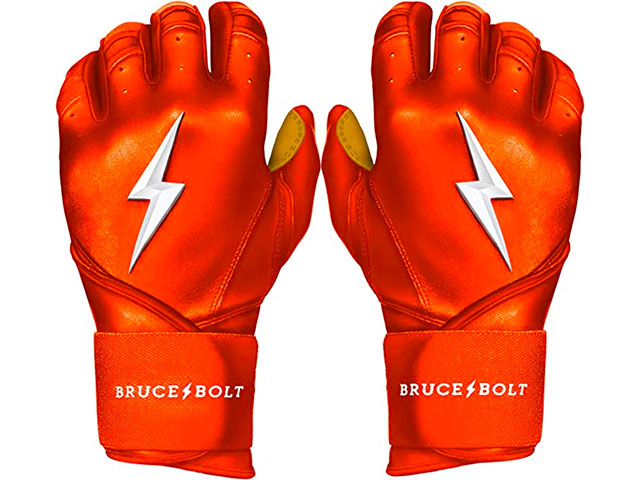 Look at these fantastic, premium quality orange batting gloves. Dusty would be proud.

According to The Athletic, Dusty has consistently impressed his players over the years with inspirational "quotes" and old school know-how. Then there was the time, according to Ex Washington National pitcher, Joe Blanton, that Dusty brought in Willie Mays to help.

There was Baker, using a Hall of Famer and 12-time Gold Glove Centerfielder to rile up the troops and get them to rally around each other as a team.

Numerous theories are floating around as to why Dusty Baker wears gloves. However, the recent coronavirus pandemic and the subsequent worldwide quarantine restrictions have been at the center of most of the recent theories.

Even though Baker hasn't said it outright, his wife Melissa has confirmed that the reason he wears gloves is to protect him from the coronavirus, telling SportingNews that Dusty's gloves, "are a precaution for COVID-19." 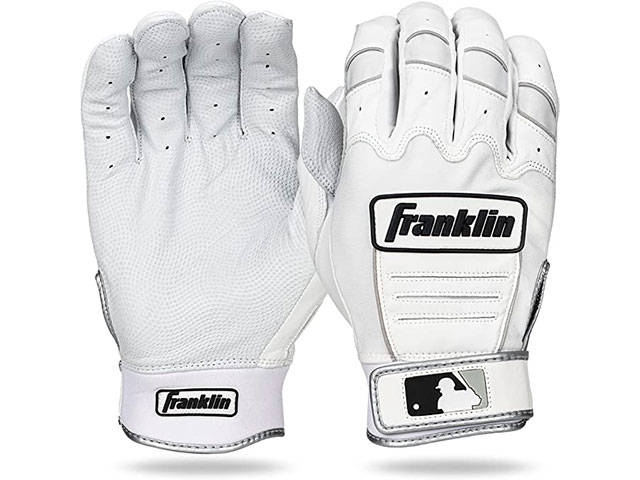 These are as close as they come to the ones Dusty is wearing in the photo above.

Baker is at a higher risk of contracting the COVID-19 virus because he is a public figure who is constantly surrounded by people. It makes sense to wear gloves as he must be shaking plenty of hands throughout the day.

During the pandemic, Baker was among the most vulnerable people. Taking safety measures was important to him, but he didn't want them to get in the way of him doing his job.

He wore gloves to the gas pump in the early stages of the pandemic and wiped down things religiously, but he also felt that there were certain aspects of his work that he could not do without.

Therefore, it is understandable why he would choose to wear gloves as a health precaution. He's had a lot of health scares in the past, and he's always advocating for others to take care of their health, including getting the COVID-19 vaccination.

Baker survived prostate cancer while he was managing the Giants. During the 2002 offseason, Dusty Baker received the news that he had prostate cancer. He underwent a procedure to remove the cancer and went on to manage the Giants to Game 7 of the 2002 World Series, where they ultimately lost to the California Angels.

Baker has managed four more major league teams since then, and he is still alive and well today despite having battled cancer.

Here is a quote from The Houston Chronicle, “I still wear a mask because I had cancer 20 years ago and I had a stroke seven years ago ... Some of the fans get on me, ‘Take your mask off.’ ... You don’t have to wear it, but it’s in my best interest to wear it.”

Later in 2012 before leaving a Chicago hospital, Dusty Baker had a mini-stroke. The hospital's stroke team responded quickly, reducing the severity of his stroke.

Baker spent some time in the Northwestern Memorial Hospital after a diagnosis of atrial fibrillation (irregular heartbeat).

So, it's quite understandable why Baker would wear gloves to protect himself from contracting the coronavirus, especially with his previous health scares.

You will often see Baker wearing vibrant sweatbands up and down his arms. Baker used to wear wristbands so that he could wipe his sweat off more easily when he was still actively playing baseball. They come in handy when he needs to wipe the sweat off his brow while keeping his hands dry.

He now wears wristbands not only to wipe sweat but also to make a statement. Most of the time, he used them to show his support for his team and their fans. They also represented other events. Baker is well-known for wearing Mimsbandz wristbands which were popular in the 1980s.

Toothpicks have become something of a trademark for him, and you can frequently spot him with one in his mouth both on the field and in press conferences. Previously, he said that he started the habit of chewing toothpicks because he would always see his father chewing them.

Baker is also frequently seen sporting a Fitbit. This is most likely an effort to become more health-conscious following his previous health scares. A Fitbit enables him to better track and manage his health.

Finally, because of the pandemic, Baker was frequently seen attending most of Houston's games while wearing an Astros-themed face mask. Even after the mandate to wear masks was no longer in place, he continued doing so.

He stated on numerous occasions that he wore a mask because he was at high risk of contracting COVID-19, which he justified by citing his history of prostate cancer, stroke, and heart problems.

Which team does Dusty Baker manage?

Dusty Baker manages the Houston Astros. A manager is responsible for coaching up not only his players, but his assistant coaches as well. He's responsible for everything that happens on field. He reviews performance, statistics, and monitors the health of his players. The only thing the head coach probably doesn't do is calculate batting averages.

He played professional baseball. That said, he probably could have made it in the NFL, too. Don't believe us? Watch this video from The Sporting News.

This was back before the days of ESPN and Fantasy Sports.

How old is Dusty Baker?

What is Dusty Baker's 2022 coaching salary?

His net worth is probably 5-10x that. It's not Lebron James or Tom Brady G.O.A.T. money, but it's better than almost all of us are doing.

Is there another Dusty Baker in sports?

Yes, actually there is a member of the media who covers baseball, amazingly enough, named Dusty Baker. Not hockey, not football, not the NBA, baseball.

My dad is a huge Dodgers fan and named me after Dusty Baker.

Throughout the years I saw him and he was always nice enough to take the time to say hi.

I told him one day I’d be down in the dugout with him.

Why does Dusty wear wristbands during games?

The Houston Chronicle suggests that superstition is the reason that Dusty wears wristbands during games. We also believe that the habit of wearing wristbands is hard to break once you start. Baseball players tend to be creatures of comfort. Once something works, it's really hard to break one of doing that every day. With a 162 game schedule, you can start to understand why.

You know who else was superstitious? Baseball player and Hall of Famer, Wade Boggs. Wade was known for eating chicken before every game. He's also known for drinking large amounts of beer after games. Guess you gotta have something to be known for ...

It seems like Dusty Baker wears gloves as a safety measure to protect his health, especially in light of the pandemic. Whether that's batting gloves, nitrile gloves or something else seems to be gameday dependent.