How Many Professional Sports Teams Are In Boston?

There are 5 professional sports teams in Boston, including the 38 championships have been won between the 5 teams, making Boston a good sports city.

Boston Pro Sports Players Who Could Be The Best Ever

Interestingly enough, Boston can make the argument that they possessed the greatest to ever play the game in each of the four major sports, with basketball being the hardest to argue for.

There is nothing to be said.

The original Hack-a-Shack. NO ONE could keep up with him, and he was a defenseman. If Orr doesn't get repeatedly bundled, he could have been it.

The guy left for multiple wars and still finished with over 500+ homeruns. Put him on the Yankees (little league porch in right), keep him home from the war(s), and he may be MLB's ONLY 1000+ HR hitter.

With Williams on the squad, perhaps the Yankees would have extended their pro sports championship-winning title lead even further.

It is simple, Bill has more rings than fingers. Of course, Chicago had a guy named Jordan ...

Which teams are they and in what sport(s)?

Like another baseball team in Chicago, the Boston Red Sox have the dubious distinction of being a pro team that does not end in "s". That said, they were much more known for having an 86 year "curse" where they didn't win a single World Series title. Since breaking the, "Curse of the Bambino", they've gone on to win 4 more in the last two decades.

And let us not forget hot corner beer legend, Wade Boggs, he of "Drank 70 beers on a cross-country flight" fame. He played at an all-star caliber for a decade for the Red Sox in the 80s. We tip our (baseball) caps to ol' Wade. May he still swill in quantity!

On December 20, 2001, an ownership group led by John Henry purchased the Red Sox for $380 million. That ownership group, which includes Tom Werner, amongst others, is officially the Fenway Sports Group. The team's current value is $3.47 billion dollars.

You'd believe Gilette Stadium was down in the Seaport if you watched a live broadcast of the games, that's how many aerial shots of the city they show. Names like Tom Brady, Bill Belichick, and Robert Kraft immediately come to mind when you think about the Patriots. But if you think a little bit longer, you may remember Drew Bledsoe, Ty Law, Stanley Morgan, Adam Vinatieri, Andre Tippett, and a whole host of others. You don't need to try so hard for Julian Edelman, as he's still chirping on social media.

The Patriots, much like the Celtics, are tied for the league lead with the Steelers when it comes to Super Bowl victories with 6 respectively. This puts them 7 behind the Green Bay Packers in terms of Pro Football titles, but who is counting those early days anymore?!

Let's not forget that Tom Brady owns 7 SB wins - more than any single team. Guy is an animal. You too can ascend to TB12 levels by competing in the Ultimate Super Bowl Drinking Game.

Tough break coming up short to the New York Islanders in Game Six recently. Moving beyond the loss, the Bruins are part of the Original Six NHL teams, having formed as a club in 1924.

Hanging in the rafters of the Boston Garden is a slew of title banners from their league-leading (tied with Los Angeles Lakers) 17 NBA Championships. The Garden held court to basketball royalty, including Larry Bird, Bill Russell, John Havlicek, Bob Cousy, and Paul Pierce, not to mention legendary coach Red Auerbach.

If we're including the Patriots, we might as well include the Revolution. They've made it to the finals plenty, but have never taken home the crown.

Not much of a revolution if we're being honest.

Here's a different Revolution in Foxborough that plays at an elite level. Boston's own, Bang Camaro!

To wrap it all up, those are your Boston Pro Sports teams. 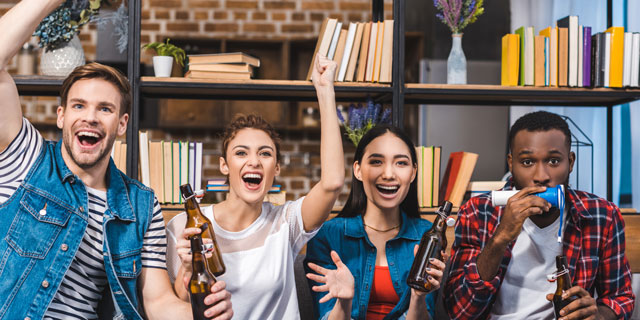 Super Bowl LVI will be played on Sunday, February 13, 2022. If you're going to throw a party, we've got the game for you.