You may be asking yourself, who is the greatest drinker of all time? We're here to tell you that it is Andre the Giant.

Sure, the world has seen some legendary drinkers. Hemingway comes to mind. Same with Bukowski, Churchill, and Hunter S. Thompson. The Man Show guy who pounds two steins in 3-4 seconds.

Andre the Giant bests them all. Even the almighty Wade Anthony Boggs looks like a minor leaguer against Andre, and ol' Tampa Wade could out-drink a thirsty camel. 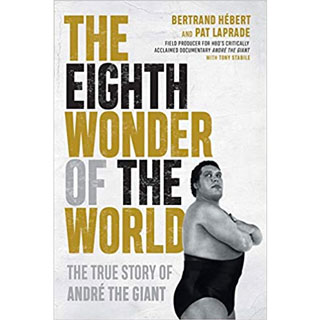 The Eighth Wonder of the World

Andre the Giant's biography cover, "... the burning questions, outrageous stories and common misconceptions about his height, his weight, his drawing power as a superstar, and his seemingly unparalleled capacity for food and alcohol."

How many beers did Andre consume in one sitting?

According to accounts on the matter, Andre the Giant could consume 119 beers in one sitting. Then again, some accounts claim 156 brewskis (a synonym for beer).

In short, Andre is his own small party. If this were a football tailgate, somewhere between 15-30 college coeds would be highly intoxicated. Comprehend this, if it were dollar draft night, Andre the Giant would need between $119-156 dollars to settle up his bar tab, depending on who you believe.

Furthermore, just how fast does one have to drink to consume that much beer? Beer drinking should really be a sport. In a list of sports that begin with b, it would fit right between Beach Water Polo and the Biathlon.

Andre holding a beer can

It needs to be seen to be believe. He's fully palming a beer can in the photo below. It's so complete.

Over the years, various interviews have been conducted with former professional wrestlers, TV hosts, actors, directors, and a whole host of other folks who knew Andre and the quotes are second to none. High profile media outlets including CBS, HBO and Vanity Fair have captured amazing footage.

Late Night hosts like David Letterman have collected stupendous soundbites. Former colleagues like Mike Graham (wrestler) and Princess Bride Co-Star, Cary Elwes, have compared drinking with Andre to gassing down a concoction of "Airplane Fuel" and actually raising the overall beer consumption total to the mid-150s in the case of Graham.

Here's a few quotes that we love:

Who was Andre the Giant?

For those of you born after 1993 (when he died), Andre the Giant was a man of many talents, drinking being one of them. He was dubbed, "The Eighth Wonder of the World", which made sense because he was 7 feet tall and 500+ pounds. He was a superstar of the American Pro Wrestling scene. He was a Hollywood actor. He was a man with killer mutton chop sideburns, chops that may have only been bested by martial artist and actor, Jim Kelly (Williams in Enter the Dragon).

Andre was born André René Roussimoff in Coulommiers, Seine-et-Marne, France in 1946. Suffering from a then undiagnosed case of acromegaly (gigantism), Andre was already 6 feet tall by the time he was 12 years of age.

What was Andre's real name?

How tall was Andre the Giant?

Andre was said to be somewhere between 6'9 - 7'4. Somehow we know how tall ancient mummified fossils are, but not a person living in the 20th century? Best to just say Andre the Giant was about 7 feet tall.

How much did Andre weigh?

When was he born?

When did he die?

How strong was Andre the Giant?

Stronger than you or I, that's for sure. His liver, as we've covered, was made of steel. He could move a car all by himself, according to Sports Illustrated. At 7 feet tall and 400+ pounds, his body needed to be immensely strong to support his size. In short, we'll never know exactly how strong he was, but it can best be described as extremely.

What kind of beer did he drink when he drank?

We're not totally sure what kind of beer Andre the Giant drank on the regular. Was it a European beer? Was it a popular American beer such as Coors or PBR?

Listen, the WWE might be fake, but Andre's drinking prowess was real. Hats off to a legend.